When considering the amount of horror pedigree that comes with The Black Phone on both sides of the camera, one could be forgiven for being completely overtaken by hype. The latest original cinematic nightmare from genre heavyweights Blumhouse (Get Out, The Invisible Man) brings director Scott Derrickson and writing partner C. Robert Cargill back together with Oscar nominated leading actor Ethan Hawke for their first original straight horror film since Sinister (2012). The creative reunion bears much fruit and scares aplenty in a tense, terrifying survivalist horror film that expertly brings to life and expands on author Joe Hill’s (Locke and Key, NOS4A2) short story.

The Black Phone centers on a pair of siblings in 1978 suburbia, Finney (Mason Thames) and Gwen (Madeline McGraw), who are living with their violent alcoholic father (a superb Jeremy Davies) after the breakdown and death of their mother. Derrickson and Cargill surround these kids with some serious levels of violence and trauma that is present in their day to day lives long before a serial killer known only as The Grabber begins abducting local children right off the street in their neighborhood. Outside of home Finney is also subjected to both verbal and violent abuse in the form of vicious bullying from a group of older teenagers at school. Gwen, with a supernatural secret of her own, is the beating heart that propels action forward at key moments through sheer force of her iron will. 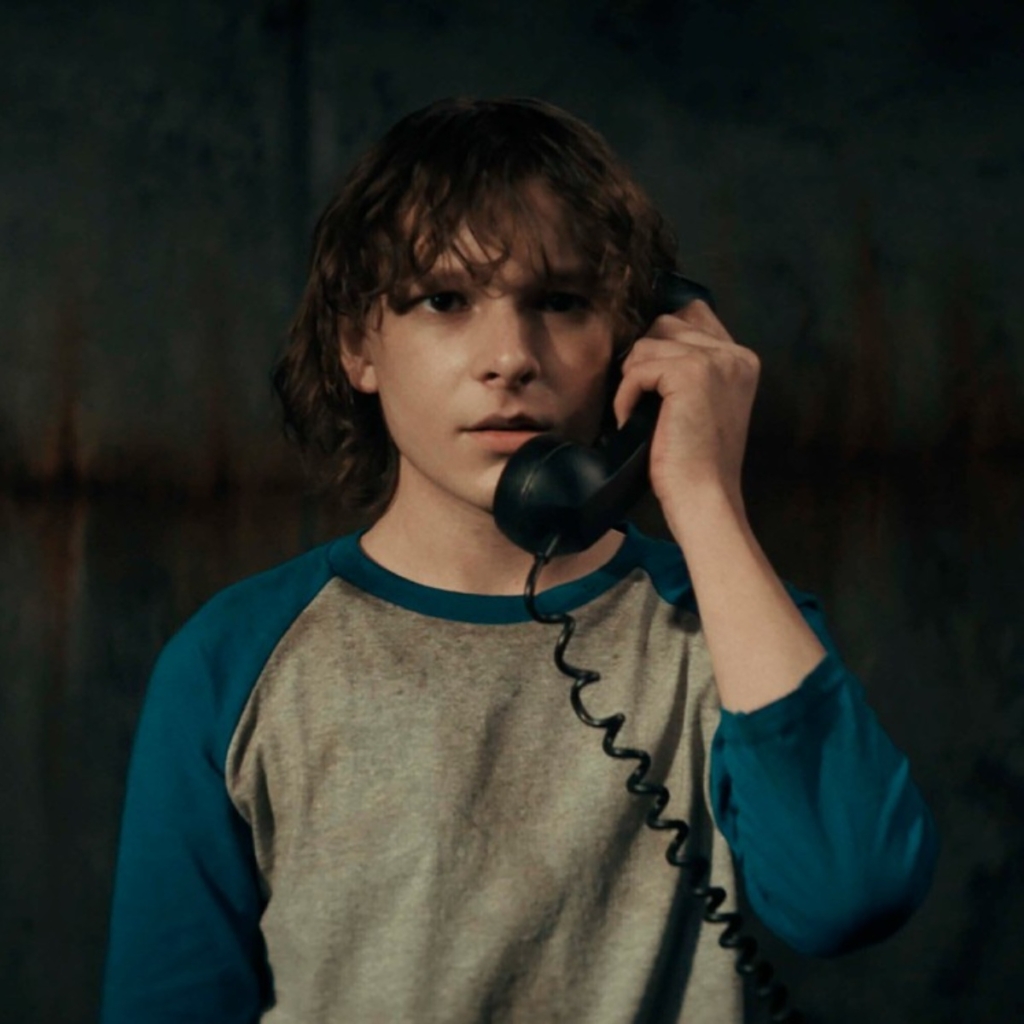 The film really allows the first act to take its time introducing and building up these characters and does so in expert fashion by humanizing the kids, and really all the characters, so that when the time comes and the audience is trapped in the worst place imaginable the fear really sets in as the movie shifts from a sort of Stephen King like coming-of-age story to an all-out survivalist horror show with a clever supernatural layer that sets The Black Phone apart.

A horror film is arguably only as good as it’s monster, and Ethan Hawke has the nuance and imagination to bring the terrifying Grabber to life. Once Finney is abducted by the top hat wearing Willy Wonka-esque serial killer he awakens trapped in a cold, hard basement that seems ripped straight from the Saw universe. Aside from a mattress on the floor the only item in the room is the titular black phone hanging on the wall behind him.

The Grabber checks in periodically to psychologically torment Finney in various ways, all while sporting variations of one of the scariest masks ever put to film, designed by practical effects legend Tom Savini (Dawn of The Dead, Creepshow). What a welcome and terrifying addition to Savini’s legacy The Grabber’s mask is! A silver horned devil mask with interchangeable facial expressions that reflect his mood and intent. When engaging in a toying conversation with Finney or offering food, the mask is fitted with a grinning Cheshire cat smile that is truly unnerving. When hiding shirtless in the dark with a belt waiting for Finney to make a false move and incur his wrath, the mask’s smile replaced with an exaggerated frown. Hawke is both extremely imposing in a real physical sense while still being impish, almost childish in the same breath. A lesser actor may have been tempted to simply go big with the character, but the veteran strikes a real balance between quiet and loud that really gets under your skin and keeps you on edge simultaneously.

The supernatural element of The Black Phone ultimately gives the film its unique edge. Phone calls from the ghosts of The Grabber’s murdered child victims made to Finney on the black phone are essential in aiding him to stay alive and use his smarts and surroundings to best the killer and escape the basement. The disembodied voices that manifest from the phone don’t exactly know who they are in the afterlife, but Finney does. He knows one of the victims personally well, but more importantly, knows the details of each of them. Their stories collectively make up a word-of-mouth bible that Finney uses against his captor, turning stories of fear and death into a story of hope and survival.

A large amount of the movie’s run time is spent in The Grabber’s basement, but it never feels like it inhabits anything less than a fully fleshed out world filled with interesting believable characters. It’s a testament to Scott Derrickson’s abilities as a filmmaker that The Black Phone balances the survivalist and supernatural parts of the film so well and throws in no less than three “jump out of your seat” scares. The production design, costume design, photography choices, and score all work and work well. Derrickson and Cargill’s screenplay adapts and expands on Joe Hill’s excellent short story without sacrificing anything that made it so compelling.

Thanks so much for reading. The Black Phone is now playing only in theaters. Check it out and share this with your horror loving friends! Follow creepylovely on Facebook, Instagram, and Twitter. If you would like to write for us just shoot us a private message or DM on social media. Stay lovely! Stay creepy!

END_OF_DOCUMENT_TOKEN_TO_BE_REPLACED

CreepyLovely is dedicated to covering all things horror in as many mediums as possible. From the biggest releases in film, television, streaming, music, literature, art, and true crime, to the international and independent arena – we have you covered.

With the best in reviews, interviews, exclusive in-depth coverage, and so much more, we hope that you will join us in raising the dead and celebrating all the wonderful things that go bump in the night!